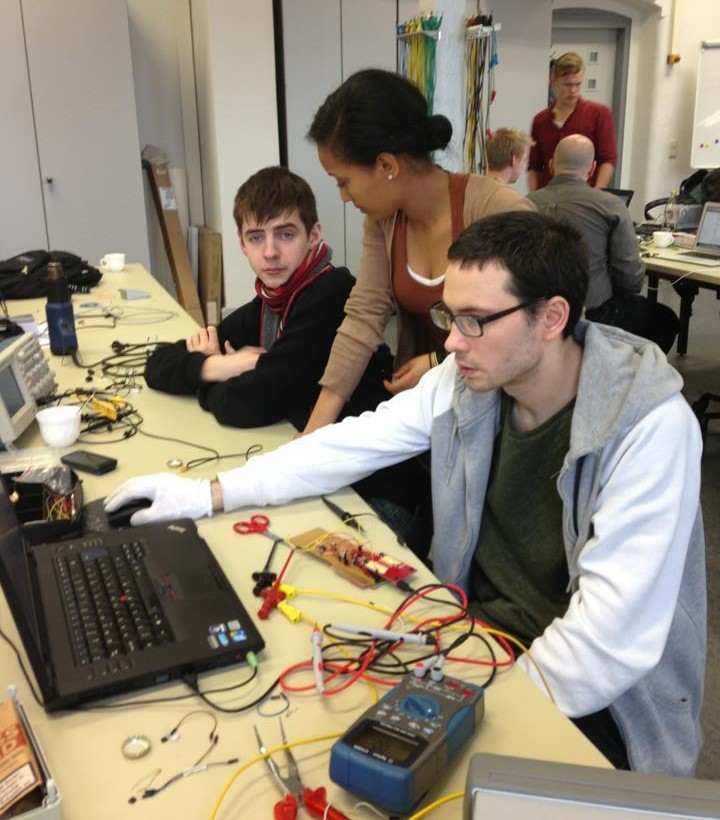 In February 2013, International Sensor Development Project was rapidly approaching the deadline. With the flight tickets booked, we have been making preparations to visit our German colleagues. Our indoor sensor module has been completed at about 30% when it was already time to go.

On Monday, 18 of February, our team of four electronic students have landed in Bremen, Germany. Same evening we took train to Osnabrück, where local students have been waiting for us. One more group of Finnish students from Embedded Programming degree has met us at the hostel close to station, and we stayed there.

Surprisingly, even during one week at late winter, I met a lot of interesting people in that hostel. To tell the truth, we’re all have been making some hard balance between working on project and just partying around. Germany was so generous with us, so almost every day we got a nice dinner and good company. But no matter how much we had to drink, every next morning was the same: bus ride to the university, spacey hallways, and finally, electronics lab. Every next day of “final sprint” week was full of new challenges, and every next day we came back later and later.

Deadline fell on Friday 22th. The day before that, almost everything was in such state that teams altogether decided to spend as much time as needed in order to finish the project. Like by Murphy’s law, most of the problems did happen at the last moment, resulting in one big all-nighter. At Friday, stressed and half awake, all the teams, one after another, presented their own part of the project. Painfully admitting failure, everyone were suddenly surprised by professor Hoffman’s explanation:

It was meant to be this way, the final week’s stress, and even the Thursday overnight. As international product development means communication and distant co-operation, utter care should be taken by each team. Now you know it.

Right after that, we got additional weeks from the professor, in order to finalize everything in relaxed pace back at home. This was calling for most relaxed weekend and a big party the same evening.

P.S. International Sensor Development Project happens to be annual practice between Hochschule Osnabrück and Metropolia University of Applied Sciences. Not to mention that every year, students tend to work on the project even during last night, all because of unexpected problems.